What are RFIDs?
26 November 2008
Macroelectronics.org will start a series of posts on RFIDs. Stay tuned. 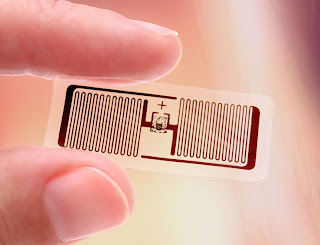 RFIDs (Radio Frequency Identifications) are microchips of very small proportions that utilize radio frequencies to store and retrieve data. RFIDs were first used as espionage, the first devices capable to retain data through radio transponders.
There are two main parts of an RFID. One part is an integrated circuit for storing/processing information, modulating/demodulating a radio frequency signal, as well as other functions. The other part is an antenna then used to receive and send signals.
There are several types of RFIDs, such as passive, semi-passive, and active RFIDs. Passive RFIDs operate through inducing a magnetic field upon them, which generates current for them to work; on the other hand, semi-passive and active RFIDs require an internal source of power for them to function. More details about the different types of RFIDs will follow up in the coming posts in this series. Later in this series, we will also introduce the current and future applications of RFIDs.
(via Wikipedia, image credit: Rexam)

Yongan Huang said...
Our Group have been devoted to RFID fabrication(package equipment). There are lots of problem needed to solve, such as the process of gluing, precise control and visual identification, and so on. But how relate RFID with nanotechnology in all-printed RFID tags? By nanoparticle, nanotube, nanoscale?... Importantly, where is the scientific problem?
8:49 PM
Post a Comment
<< Home