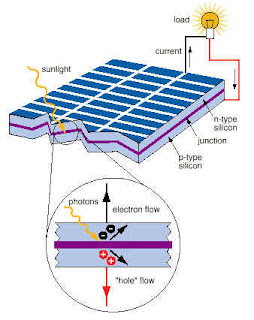 Solar cells are devices that convert solar energy to electrical energy. The process in which the solar cell converts solar energy to electricity is called photovoltaic. Traditional solar cell is mostly made out of silicon, a well-known semi-conductor. When the sunlight hits the solar cell, photons from the sunlight is absorbed by the semi-conductor. The photons then hit the atoms causing electrons to be kicked out of atoms. The movement of electrons produces electricity (see figure).

Silicon is a brittle material and fractures at very small deformation. This poses a significant challenge to make and handle large area solar cell panels. To further reduce the cost to harvest solar energy, there have been emerging efforts on developing thin film solar cells that can be fabricated on thin plastic foils by a roll-to-roll process. The functional device material used in such thin film solar cells include organics/polymer film, gallium arsenide, copper-indium selenide, etc. However, so far thin-film solar cells are not as efficient as conventional solar cells. In the subsequent posts of this series, we'll review the currently available technologies of thin film solar cells.