OLEDs: types and applications - white OLEDs
16 March 2009
This is the fifth post of the Macroelectronics.org OLEDs series. Stay tuned. 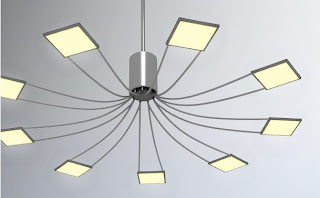 White OLED is possibly the future generation of lighting source. A typical incandescent light bulb is roughly 12 lm/watt. (Lumen or lm is the unit describing the perceived power of light. Therefore, lumens/watt tells us how bright the light is generated per one watt.) The energy efficiency of conventional incandescent light bulbs is only about 4%. That is, for every 100 units of energy input to a light bulb, 96 units of energy are lost mostly in a form of heat. On the other hand, a fluorescent light, even with a much better efficiency up to 92 lm/W, poses an environmental problem due to the fact that it contains mercury which is hard to dispose and is harmful to an environment. The light produced is not an incandescent light; thus making it uncomfortable to human’s eyes. In addition, two types of these light bulbs are constrained by certain shapes. For example, fluorescent light always have to be shaped as a long tube. OLED lighting provides solutions to these problems.

OLED lighting uses the same technology as most OLED displays except that it only produces white light. Currently, the efficiency of white OLED is 102 lm/watt with a potential to reach up to more than 150 lm/watt according to Universal Display cooperation. Not only that, this OLED lighting is a thin sheet and does not have to be conformed into any specific shape. Imagine a wallpaper of paper-like light bulb. Because OLED composes mostly organic materials, it does not cause any environmental problem. The main setbacks with white OLED are that it can be easily damaged by water and the manufacturing cost is still too high to become a mass production. In year 2000, The U.S. Department of Energy established the solid-state lighting program which helps funding researches related to new generation of lighting. Universal Display, Philip, GE, and many other companies including government agencies are trying to push this OLED lighting technology forward, making the future of “greener light bulb” several steps closer to our home.